Catboats are not Catamarans! 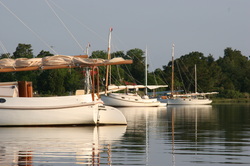 THE CATBOAT AND ITS NAME

There have been many ideas presented for the origin of the name "Catboat" - the boats we think of so fondly today.  It's the rig, the length to beam ratio, the portlights, the hull design and others - all that epitomize what we call the Catboat.  No mention - that I've seen - has been made of the narrow catwalk'ish decks you are almost forced to walk with one foot placed in front of the other - much as a cat does, and only brief mention of the boat's sailing abilities.  Cats also have an innate ability to always land on their feet, and catboats certainly sail flatter  - and recover - than their sailing counterparts.

I was out for a beautiful "winter" sail on the Patuxent River 1 Jan 2006 with only brief  "gusts" of wind that registered 3 knots at best.  For portions of the sail and for that quiet return up Back Creek to her slip, no wind registered on the water at all - yet she moved ever so quickly and in utter silence, much as a cat stalks its prey in an open field, approaching stealthily yet with the ability to demonstrate quick bursts of speed when all others are resting quietly.
THBS - 1/6/06

It sits looking
over harbor and city
on silent haunches
and then moves on.


THE AMERICAN CATBOAT AND ITS HISTORY
A plain, stout, generous, powerful, simple, stable forgiving paragon of workboat development, the American catboat is probably best known as a shallow draft, centerboard vessel between 12 and 40 feet overall, with a beam half as great as its waterline length.  Its rig is a distinctive large single gaff sail set on a strong mast well up in the bows supported by a single forestay with an equally distinctive big, barn-door rudder, as much as one sixth of the boat’s overall length.

From the mid-19th to the early 20th century, the cat became the dominant inshore boat of all work and occasional pleasure from the Chesapeake to Southern New England.  The type evolved through a need for versatility and in its working days had many more than nine lives.  It was used for mackerel seining, handlining for cod, swordfishing, party fishing, scalloping, lobstering, water delivery, livery calls, courier duty and many other prosaic roles.  In short, the working catboat was the waterborne pick-up truck of its day, used at a time when America’s roads were notoriously poor or non-existent.

Indeed so ubiquitous was the catboat in the alongshore waters of northeast American that it was taken for granted.  For generations it was designed, built and sailed with extraordinary skill by mostly anonymous men of humble origin who began, more often than not with a carved half model.  Many came out of small shops and or barns where the shipwrights were also house carpenters.

The type was not to remain so popular however.  The catboat’s decline began slowly, insidiously, about a century ago.  Racing men crowded on quantities of sail and cats developed a bad name for being unstable and unsafe.  At the same time, working men began to install the new, primitive, two-cycle gasoline engines, shortening the rig, taking out the centerboard and ultimately destroying the balance and utility of the sail.  Designers concentrated on deep-keel sailing boats and power-driven workboats.  Hurricanes of the 1930’s, ‘40s and ‘50s wiped out some of the catboats; simple age took their toll on others.  There were few replacements.  Fifty years ago, some believed the catboat to be as extinct.

Redemption came with a modest group called the Catboat Association (CBA), which in 1962 brought together two-dozen seasoned skippers of mostly elderly cruising cats on the Connecticut shore.  They sought mutual aid, friendly support, a helping hand for what they saw as a “noble but diminishing breed.”

Lighter designs in fiberglass and renewed interest in wood construction began to attract new sailors with varying needs:  families took to the catboat, because its large cockpit and substantial coaming helped keep children safe; practical people liked a boat that could be brought home for storage and maintenance; nostalgics sought the appeal of a traditional design and the sailing ways of an earlier era.


THE AMERICAN CATBOAT TODAY
In 1963, Breck Marshall developed and built his first fiberglass 18 ft Sanderling cat in a New Hampshire dairy barn.  Sailing to the first scheduled Catboat Association race-rendezvous at Osterville, Massachusetts in August of 1963, Marshall unofficially raced ANTIDOTE against a dozen wooden cats, and left the fleet well astern.  He had made his point quickly and succinctly.  By 1964, Marshall 18s were selling throughout New England and as far afield as the Gulf Coast of Texas.  A few years later he developed a 22’ cat and then a 15’6” one.  Marshall, whose catboats now number more than 600, can be credited with the rebirth of the catboat.  In modern fiberglass trim with light aluminum spars, catboats now exist in the thousands and dominate the American catboat scene.

Other limited fiberglass production builders followed with similar traditional hulls, including Ted Hermann of Seaford Harbor, Long Island, New York who built the 17’ Hermann Cat in both marconi and gaff rig to a Charles Wittholz design.  An updated version is currently available from Cape Code Shipbuilding in Wareham, Massachusetts.  Peter Legnos of Groton, Connecticut built the lovely Mystic 20 in both gaff cat and sloop rigs, while Bill Menger of Babylon, New York built a 17’ gaff catboat, later stretched to 19’ due to a shop fire, and also currently offers a Legnos designed 15’ and a Sweisguth designed 23’ cruising cat.  In New England, Halsey Herreshoff designed an 18’ 2” fiberglass cat called the Herreshoff America, of which more than 150 were built, while on the West Coast, Fernandes Boatworks in Richmond, CA created the 17’ Molly Cat, with design details adapted to the prevailing wind and sea conditions in San Francisco Bay.  In the larger cruising cat category, Mark-O Custom Boats in New Jersey produced the David Martin designed Atlantic City Cat in 21’ and 24’ models.  Among smaller designs, Cape Dory for a time produced the Merle Hallet designed 14’ Handy Cat, while the marconi-rigged and Edson Schock designed Strurdee Cat, at 14’ 4” is still being built in Tiverton, Rhode Island.  Compass Classic Yachts of South Orleans offers 12’6” and 14’ 2” traditional gaff cats.  In wood/epoxy composite construction, Arey’s Pond of South Orleans, Massachusetts offers 12’ 6”,14’ and 16’ models, both with traditional cat rigs.  Most recently, less traditional contemporary interpretations are available from the Hutchins Company (Com-Pac Yachts) of Clearwater, Florida with Clark Mills designed 14’ and 17’ models as well as a reincarnated version of the Herreshoff America called the Horizon Cat.

For homebuilders or custom one-off boats, the Charles Wittholz Catboat Design Booklet is still available with traditional catboat designs from 11’ to 29’.